ArtRockMuseum. New sounds in Palazzo Pepoli returns for its second edition in the Museum of the History of Bologna. During this season the festival will feature, in an unusual and unique location of the city’s historic centre, artists and new genres of the contemporary Italian scene that have contributed to make Bologna an internationally important city of music. The ten free-entrance concerts, take place every Thursday at 7.30 p.m.
Interesting showcases in which artists, besides playing, also present their work chatting with the festival curator Pierfrancesco Pacoda. In the intimate atmosphere of Palazzo Pepoli’s courtyard and in a close relationship with the audience, different musicians will take the scene sharing the same desire of creating a live show accurately tailored for the museum 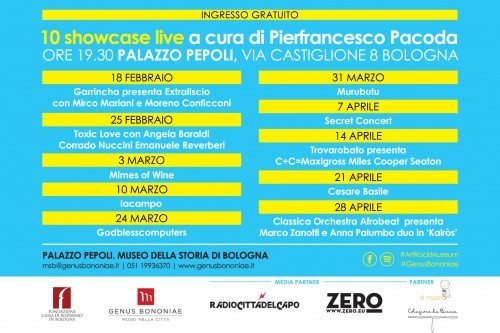 The collaborations with the record labelsGarrincha Dischi and Trovarobato continues and for the first time an international guest has chosen ArtRockMuseum to present his new album.

During the entire period of the music festival, the museum bookshop will be transformed into a temporary shop where all the albums of the artists preforming at ArtRockMuseum will be available: cds, vinyl discs, gadgets and also other exclusive objects. The Museum Café, curated by Colazione da Bianca, will realize a special gastronomic offer for the evening.

As happened last year, a media partner of the initiative will beRadio Città del Capo, that will host in its studio all the artists performing at ArtRockMuseum and will broadcast the live show of the week on Sunday morning. Moreover, the first five radiosubscrivers, that will take part to the concert, will get a free drink at the Museum Café. A new media partner of the Bolognese musical festival will be Zero, a magazine about the city’s cultural realities, which will give great visibility to the artists. Also, the collaboration withUnibo Magazine will be renewed, the on line magazine of the University of Bologna, that will offer little gifts to students every week.